A large well known oil refinery in the United Kingdom gave TesTex the opportunity to show our ability to inspect the floor of an Above Ground Storage Tank in comparison to the spot check U.T. in use by the refinery. The TesTex Falcon 2000 Mark II Digital Tank Floor Inspection System operates on the principles of the TesTex proprietary Low Frequency Electromagnetic Technique (LFET). Some of the advantages of the Falcon 2000 Mark II System include minimal cleaning, the ability to test through coatings, and not requiring couplant or permanent magnets. The refinery was most interested in the Falcon 2000 Mark II Systems ability to scan the entire floor with a speed of 15-20 feet per min.

The majority of the tank floor was five-years old-with the annular plates being considerably older. The nominal thickness of the carbon steel floor was 0.250” wall with a 28 foot diameter. During the inspection, the refinery inspectors were impressed with the speed and coverage of the Falcon 2000 Mark II System. The inspection showed that the majority of the tank was in generally good condition. However, wall loss was found on the underside of three plates. One indication showed a 10” band of corrosion with a 1” diameter 0.040” wall remaining pit. This area was compared to the U.T. inspection report with the U.T. report showing no indications of wall loss. In addition, the refinery tried to confirm the TesTex findings with their in-house U.T. staff without success. To verify results this area was cut out and visually inspected. The visual inspection showed a band of corrosion with a severe pit proving the Falcon 2000 Mark II Systems ability to detect indications. A mechanical inspection was also performed and proved the accuracy of the Falcon 2000 Mark II Systems sizing abilities. 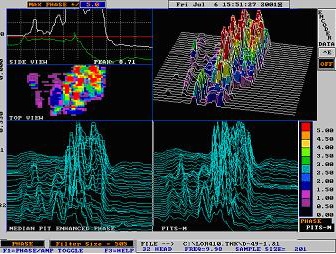 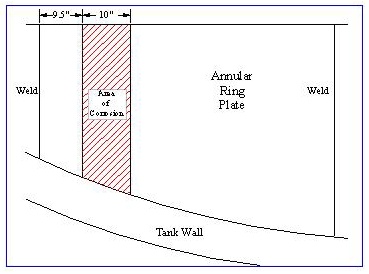 Figure 2: Location drawing of the 10′ band of corrosion across the plate. Note the proximity of the annular ring.﻿﻿﻿﻿﻿﻿