A major chemical plant in Western Pennsylvania asked TesTex to perform a partial inspection (50 percent) of the 324 tubes in one of their heat exchangers on a scheduled plant shut-down. TesTex and the plant contact agreed on an “every other tube” test pattern. The exchanger consisted of 1.0″ O.D. 0.065″ wall carbon steel seamed tubes (SA-214). The tubes were 8 feet long with contact to 14 baffle plates. TesTex used the Eagle 2000 Digital Inspection System and the Eagle 2000 Plus Multichannel Digital Inspection System, both employing the Remote Field Electromagnetic Technique, for this inspection. All tubes tested showed less than 15% wall loss with no signs of pitting, cracking, or general corrosion. When the shut down was complete, the plant placed the exchanger on-line and within two days, they discovered a leak in the exchanger. The client did a pressure test and found a leak in one of the tubes that was not tested. This heat exchanger was in the middle of the plant’s critical process line and the exchanger had no immediate backup tube bundle. Without a backup, the client needed to get this exchanger back on-line immediately.

The client called TesTex and requested that staff would be on-site early the next morning. TesTex staff arrived and were able to inspect the remaining 162 tubes of the heat exchanger in approximately 4 hours. The tubes on the second inspection showed less than 15% wall loss with no signs of pitting, cracking, or general wall loss with the exception of the leaking tube. The leaking tube showed a massive signal near the center of the length of the tube.

Figure 1: This example shows the Eagle 2000 Plus Multichannel Digital System Waveform of the “Leaker”. 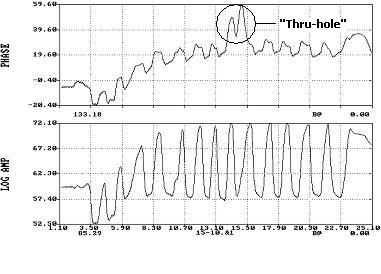 Although, partial inspections usually give a good generalization of a unit, it is possible for a flawed tube such as this one to go untested. This “leaker” caused 2+ days of unscheduled downtime. If all the tubes in the heat exchanger were inspected, the forced shutdown would have been avoided. The plant is not to blame, however, for doing a 50% inspection versus 100%; when sampling, most clients only do 10% to 20%. TesTex proved to the chemical plant its ability to detect, size, and report indications along the entire length of the tube. Due to the speed, accuracy, and cost effectiveness, the Eagle 2000 Digital System has been invited back to inspect the chemical plant’s other heat exchangers. In addition, the chemical plant’s engineers are also interested in inspecting the tubes in the plant’s package boiler with the TesTex developed Eagle 2000 Digital System and inspecting heat exchanger shells with the TesTex Falcon 2000 Digital System.

If you would like to learn more about the Eagle 2000 System or other quality TesTex products and services, please contact us or call 412.798.8990.